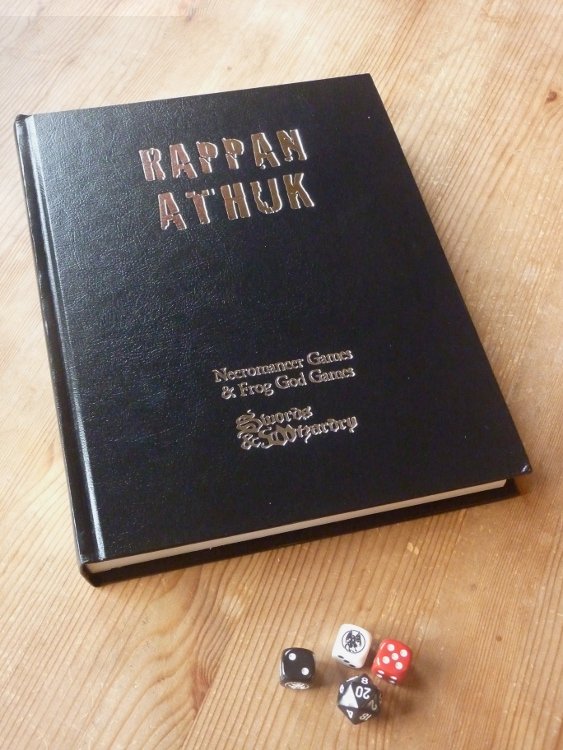 ADVENTURE 1: Journey to the Dungeon: The heroes were; Ashrem of Dyvers, a ranger, Tyro Lyadon, a powerful cleric, Karl Tain the archer, the roguish Sithdar Darkblade, and Kerit of Rel Astra, a monk. They had all come from Nenkal Isle, capital of the civilized empire, and were all on a high-paying mission from the temple of all gods, who wished them to recover the remains of three heroes who had gone into the dungeon long ago and never returnedSaracek the noble warrior, Zelkor the mage, and Bofred the high-priest. Though Rappan Athuk was rumored to be a very deadly place, all took the mission, and were offered five thousands gold for each body they returned to be purified.
They soon arrived by boat in Port Grinetos, a town of merchants and adventurers, set on the northern shore of Corregon Isle, where the legendary dungeon of Orcus was supposedly located. They spent a good deal of time in town, hearing rumors of the dungeon from a drunken halfling: who spoke of purple worms on the third level, black skeletons, and other horrors. Kerit purchased a scroll of stone to flesh when he heard about the priestess who had been turned to stone on one of the lower levels, and would reward any who freed her with a wish. Ashrem then arranged a meeting with Memnor, a local wizard, who he thought might have some valuable info for the group. That night, the ranger also spotted a strange creature in the waters near towna confirmation of the rumors he had heard about fish-men in the area. The next day, they all went to see the wizard, who had never been to the dungeon, though he had heard a rumor about a magical mushroom that could restore youth to any who ate it, somewhere in the dungeon. He offered 15,000 gp to any who brought it back. Since the mage knew nothing more, they set on their way, heading towards the dungeon, but avoiding the south-eastern route, which was rumored to be where the fish-men lurked. Instead, they took the west road, past a marsh where they nearly encountered some kind of shambling monster, but wisely backed away from the fight. They took camp on a large hill, at the bottom of which they discovered the remains of some kind of dark ritual, which Tyro recognized as being something to summon a demon. As a joke on Ashrem, the others built a duplicate of it, next to their camp, while Tyro prayed inside of it. This almost caused a fight, but ended as the ranger went further off to make his own camp. In another day, they were nearing the site of the dungeon of graves. They passed a town of strange peasants, who seemed to understand the Abyssal language, and found an odd hand on a necklace underneath a local monolith. Then they went south of the dungeon, and toward the nearby townwhich was totally deserted, with no sign of struggle. Ashrem found many tracks, leading out of town in an orderly procession, and straight for Rappan Athuk, no villagers present. He also later discovered a cache of hidden wealth inside the mayors house, including a red wand of some sort. The next morning, after the PCs made camp in the town, Kerit and Tyro nearly killed each-other over an incredibly stupid issue. It seemed as though Kerit had charged Tyro for getting a drink at the abandoned bar! Fortunately, this little spat did not end in death. After a bit more shenanigans, the characters were off following the tracks, right into the heart of the marsh where their destination waited. They found it by noon: a great depression in the earth, filled with hundreds and hundreds of graves. The much-spoken-of well was here, and so were several large mausoleums. The central one was a horrible site, covered with demonic symbols and decorated with gargoyles. Kerit wisely decided to give them the middle finger, and they retaliated by animating and attacking him. Seven appeared at first, followed by an eighth later. It was a hard battle, but thanks to some powerful spells by the cleric, brave shots by the archer, and backstabbing by the rogue, the party was successful, with none of their members down. (Though Ashrem was almost dropped into the well by a gargoyle). Among the remains of the beasts, the characters found large green gems, which looked to be quite valuable.

ADVENTURE 2: Skeleton Surprise: As the characters were recovering from their first battle, another person came into the area: the fighter Karosian, a man who was strong yet very ugly. He had come from the nearby town, and was apparently the only person who had not disappeared. He had tracked his family and friends to this ruined cemetery, and was intent on looking for them. The characters went inside the main mausoleum, careful to open the door with a key they had found inside the base of a dwarf statue outside. Inside was a sarcophagus, nothing unusual for a crypt, really. Atop it burned two eternally burning candelabras, both of which were later taken. For some time, the characters looked for a secret passage. Some eventually gave up, going to look through the other mausoleums, while Sithdar stayed at this one. Soon they also discovered that the main door closed after some period of time, and that the key was teleported back to the statue compartment. While looking around the graveyard, Karl disturbingly found a grave with his own nameas did everyone else besides the evil cleric. Karit even decided to dig up his own grave. Most of the characters then opened one of the smaller mausoleums, to find it completely wrecked and taken over by rats: who attacked Karosian. Fortunately, the PCs easily defeated them, finding nothing inside. Back at the main tomb, Sithdar found a secret panel, which could be pushed back to allow entry to some other passage. Before looking inside, though, they decided to open the sarcophagusto their dismay. A black skeleton came forth as Ashrem and Karosian opened the lid, attacking them, and sending them both running in fear. The others, who were outside, eventually joined the fight as the skeleton chased them out of the tomb, also managing to scare some others with its unnatural aura. It was a tough battle, and many characters had their strength sucked away, but in the end they won, nearly at the cost of Karits life. They decided to stay in the deserted town of Jolien for two days to heal, then they headed out again, and into the depths of the dungeon. On the first floor they found littlea caved-in chamber, a dead rat covered with green slime, a few coppers, and a trap that Karl stepped in, catching him in a stair and poisoning him. In the next room they discovered an odd sight: a skeleton sitting in a chair, a deck of cards on its lap, and red ants crawling across the body.

DMs Comments: So far we’re all having a good time. Although the players spent quite a bit of time mucking about and arguing with each-other, it was all in character and all fun.They have yet to encounter anything truly hardcore, but are already getting a sense of how dangerous the dungeon can be. A few characters have even thought of leaving. The funniest moment so far (not mentioned in the journal) was when the cleric Tyro cast a sound blast on the gargoyles, stunning some of them, but also stunning the rogue who was in the middle of fighting a few. Next turn, unable to move, the rogue was hit by the gargoyles and paralyzed, which ended up almost costing the PCs the battle. Hopefully, they’ll have as much fun with Dungie, who looks to be coming up in our next session! (Along with the wererats and possibly level 2).

Begin typing your search above and press return to search. Press Esc to cancel.